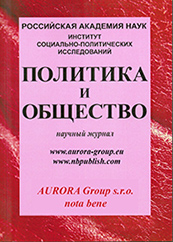 This issue is currently being formed. All articles presented on this page have already been included in this issue, are considered published, and will remain unchanged in the final version of the issue along with other metadata of the articles.
Founder: Dr. Danilenko Vasiliy, w.danilenko@nbpublish.com
Main editor: Popova Svetlana Mikhaylovna - Doctor of Political Science, Institut demograficheskikh issledovaniy FNISTs RAN, Vedushchiy nauchnyy sotrudnik, 119333, Rossiya, g. Moskva, ul. Fotievoy, 6 k.1, sv-2002-1@yandex.ru

Review: The subject of the study is the image of BRICS in the Argentine and Mexican media. In the modern world, the role of multilateral institutions, including the BRICS group, is increasing. In 2022, Argentina applied to join the BRICS. In the context of the restructuring of the entire architecture of the system of international relations, the development of cooperation with the "Global South", as the leader of which the BRICS is positioned, seems extremely relevant for many countries of the world. In turn, such cooperation is impossible without the formation and strengthening of a positive image of BRICS in developing countries, among which Latin American states play an important role. The research is based on a constructivist methodology, according to which the image of the state or other political actor is a social construct created discursively. The purpose of the article is to identify the specifics of the image of the BRICS in the Argentine and Mexican media. The chronological framework of the study includes the period from 2014 to 2022. Research method: content analysis. The author comes to the following conclusions. Firstly, the image of BRICS in the Argentine and Mexican media is mostly positive. In addition to informational messages, they publish analytical materials in which BRICS is considered as one of the influential actors in global politics. Secondly, the range of opinions and assessments of BRICS in the sources is heterogeneous, which speaks, first of all, about the pluralism of Latin American media. The sources considered pay great attention to Brazil as the only Latin American country that is part of the BRICS, and Argentina as the only Spanish-speaking country that is preparing to become a member of the BRICS.
Keywords: Mexico, Argentina, Latin American media, mass media, international organizations, multilateral institutions, BRICS, Latin America, image, the image of BRICS
Theory of political sciences

Review: The subject of this paper is the programs of political parties in Western Europe. The object of the study is nationalist ideas and their extreme and radical manifestations within European politics. The authors note the interest of the European political elite in nationalist ideas. This process is related to the possibility of using these ideas to solve acute socio-political conflicts within countries. Economic instability, migration crises, and acute political turbulence impose significant restrictions on the activities of political elites in developed countries. Historical unresolved problems of national identity on the one hand, and the desire to form a true multipolar world on the other, form a different attitude towards the ideas of nation and nationalism. This is reflected in a number of political and open military conflicts in the large space of cultural and socio-political contact between Europe and Russia. The authors draw attention to the fact that nationalist ideas are in some cases addressed by politicians in both Europe and Russia. The danger of the contemporary reevaluation of the ideas of nationalism is that it encourages atypical thinking, while belief in authority ceases to play a cognitive and functional role. The authors offer not only an analysis of the programs of political parties in many European countries, but also calculate their specific weight in the context of national parliaments. This makes it possible to determine the conditional acceptance of these ideas as a basis for the political course of the state.
Keywords: russophobia, islamophobia, euroskepticism, multiculturalism, natizm, political ideology, political parties, nationalism, national identity, soft nationalism
Parties and party systems

Review: The author analyzes the solution of the social issue in the programs of Russian political parties. It is noted that not all Russian parties have a social program, despite the fact that political parties have the opportunity to formulate the main directions of social policy and implement them. The program documents of such parties as United Russia, Just Russia, and the Communist Party of the Russian Federation are the most informative. Pension provision is the most demanded by political parties, therefore, each program contains proposals for its solution. It should be noted that not all political parties offer real plans for improving pensions, many party documents contain criticism and rhetorical exclamations. The issue of social insurance is considered by the parties to a lesser extent. We can note the specific proposals of the parties "United Russia" and the Liberal Democratic Party. The article concludes about the important role of social policy programs for the political future of parties. The real result of the elections to the State Duma in 2021 testifies to the importance of social policy in the program documents of a political party. The elections were won by parties that had social programs: United Russia, which won by a wide margin, the Communist Party of the Russian Federation, which received 18.93% of the vote, and A Just Russia, with a score of 7.46%. Thus, the solution of social issues is the key to the longevity and political relevance of the party.
Keywords: Russia, Social issue, Party, Politics, social projects, social support, pension provision, social insurance, social policy, Program