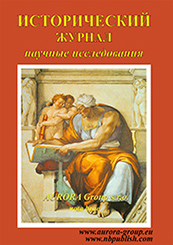 This issue is currently being formed. All articles presented on this page have already been included in this issue, are considered published, and will remain unchanged in the final version of the issue along with other metadata of the articles.
Founder: Dr. Danilenko Vasiliy, w.danilenko@nbpublish.com
Main editor: Karpov Sergey Pavlovich, akademik RAN, doktor istoricheskikh nauk, medieval@hist.msu.ru

Review: The article is devoted to the study of the development of the transport network of one of the largest regions of Russia on the example of mapping land routes in different historical periods. The relevance of the research topic is due to the lack of research, among the available historical and geographical works related to the study of the history of mapping the transport network of Yakutia. The purpose of this work is to study the history of the development of the transport network of Yakutia from the XVII to the beginning of the XXI centuries based on the analysis of various cartographic sources. To achieve this goal, the domestic experience of transport mapping was investigated; on the basis of identified published and unpublished sources, multi-time maps showing land routes of communication were selected and analyzed; on the basis of the analysis, the main stages of mapping land transport in Yakutia were identified. The study was conducted using a systematic approach, historical-comparative, cartographic and geoinformation methods. Due to the fact that this research is at the junction of a number of sciences, the work is based on an integrated approach. As a results of the study, the authors identified the stages in the history of mapping the transport network of Yakutia: the first stage (XVIII – late XIX centuries); the second stage (the first half of the twentieth century); the third stage (mid–twentieth century - 1990s); the fourth stage (post–Soviet period - to the present). Currently, a new information environment for the development of historical and geographical sciences is being created. GIS technologies enable access to historical maps, as well as the emergence of new ways to extract historical information from them. There are opportunities to detect previously hidden information, extract it and process it. The practical significance of the presented work is connected with the possibility of using its results to determine the directions of development and optimization of territorial aspects of the functioning of transport networks of the Republic of Sakha (Yakutia).
Keywords: GIS technology, stages of development, Ayan way, Okhotsk way, multi-time analysis, maps of transport, mapping, ways of communication, transport network, Yakutia
HISTORIOGRAPHY AND SOURCE STUDIES

Review: The article is devoted to the main historical and historiographic researches of Professor P.A. Kuzminov. It conventionally singles out several main blocks of research by the scientist, including works devoted to the historiographic study of the liberal reforms of the 1860s–1870s. in the North Caucasus, the processes of implementing reforms in the region, its socio-economic and political and legal development; works that analyze the methodological and organizational problems of modern Caucasian studies, the scientific and social activities of individual pre-revolutionary, Soviet and modern historians, etc. The article also considers the work of P.A. Kuzminov on the collection and publication of historical sources on the history of the development of the North Caucasus at the end of the 18th - 19th centuries. The novelty of the article lies in the fact that in modern Caucasian studies there are no works devoted to the scientific biographies of individual scientists who, in their works, determine the course of development of research on certain problems of historical science. According to the authors, in the course of studying the biography of a scientist, it is possible only not to find interesting information about the life of an individual, but also to better understand the course of the organizational, institutional and methodological development of all science. The authors come to the conclusion that P.A. Kuzminov, on the basis of modern theoretical and methodological approaches, conducted a comprehensive historical and historiographical analysis of various problems of modern Caucasian studies. Most of the scientists works are devoted to the history and historiography of the liberal reforms of the 1860s-1870s. in the North Caucasus, various socio-political and agrarian issues of the development of the region during its integration into the Russian Empire.
Keywords: modernization, sources, agrarian relations, liberal reforms, North Caucasus, Russia, Kuzminov Petr Abramovich, Caucasian studies, historiography, control system
History and historical science

Review: This article is devoted to the study of issues of cooperation between the USSR and the PRC in the field of personnel training for the healthcare sector in the 1949-1960-ies. Based on the analysis of archival data, sources and literature on this topic, the authors came to the conclusion that after the establishment of diplomatic relations between the countries in 1949, intensive interaction began in various sectors of the economy and public life. The research focuses on the features of building the healthcare system as a whole, as well as training personnel for this area at the initial stage of development of the Chinese state and its healthcare system.    It is revealed that despite the short historical period of active cooperation, China, with the help of the USSR, was able to integrate the Soviet model into the national health system, which allowed solving one of the acute social problems in the specified historical period. In addition, the Soviet model of public health made it possible to deal in a timely manner with the threats of the spread of diseases, including those of a mass nature, up to the present time. The authors concluded that the development of cooperation in the field of healthcare between our countries can be divided into five main stages. The period 1949-1960 is the most effective, since it was at this time that comprehensive assistance was provided by the USSR.
Keywords: education, scientific exchanges, cooperation, PR China, USSR, healthcare sector, training personnel, doctors, experts, consultation
History and historical science

Review: The purpose of this study is to characterize the development of traditional forms of Yakut farming – cattle breeding and horse breeding in the Kolyma region of Yakutia against the background of socio-political transformations in the first third of the twentieth century. It is noted that the geographical isolation of the region from the rest of Yakutia has led to its autonomous development and conservation of the local economic model of life activity focused primarily on transport animal husbandry, including horse breeding. It is revealed that in the twentieth century, priorities began to shift towards the development of cattle breeding and the transition from horse breeding as the main type of economic activity. The use of historical-comparative, historical-system and statistical methods became the methodological basis of the publication, which allowed analyzing socio-economic processes in the north-east of Yakutia. An important result of the study was the assumption that it was the movement of the rural population fleeing from the war from the central regions of Yakutia, where cattle breeding had long prevailed over horse breeding, to the quieter and previously inhabited north-eastern regions, that became the main reason for changes in the economic structure of the Kolyma district in the 1920s. As a result, the number of farms and the number of cattle has increased significantly, affecting the way of life and the structure of the local economy by expanding the area of northern cattle breeding in the Arctic region. Thus, the first third of the twentieth century in the Kolyma district became a time of impulsive transformations of the traditional way of life of the local population caused by the political and socio-economic crisis that followed the 1917 revolution.
Keywords: migration, circumpolar census, horse breeding, Arctic cattle breeding, traditional economy, indigenous peoples, Kolyma region, Yakutia, Arctic, Civil War
History and historical science

Review: This article is devoted to the study of the perception of the phenomenon of nihilism by the well-known socio-political figure and conservative journalist M. N. Katkov, whose ideas became quite widespread among the students of the second half of the XIX century. The article analyzes the material of the most famous socio-political journalistic publications of M. N. Katkov – the newspaper "Moskovskie Vedomosti" and the magazine "Russian Bulletin". The anti-nihilistic views of M. N. Katkov are the subject of this study. Russian students' nihilism according to M. N. Katkov is the task of this article to reconstruct the concept of nihilism of Russian students according to M. N. Katkov, by identifying the main factors called by the latter as the reason for the spread of nihilism among Russian students of that time, as well as highlighting the main methods of combating this phenomenon proposed by M. N. Katkov. Within the framework of this study, the key features of M. N. Katkov's anti-nihilistic concept are highlighted by analyzing his articles published in the journal "Russian Bulletin" and the newspaper "Moskovskie Vedomosti" from the late 50s to the mid-80s of the XIX century. The main causes of radicalization of the consciousness of students in the Russian Empire of the second half of the XIX century according to M. N. Katkov are determined, as well as the main countermeasures proposed by Katkov to combat the above process. The novelty of this study lies in the detailed analysis of each of the above-mentioned factors and the study of Katkov's perception of the role of each of these factors in the process of radicalization of young people.
Keywords: Fathers and children, liberal intelligentsia, gymnasium reform, young students, conservatism, radicalization, nihilism, Russkiy vestnik, Moskovkiye vedomosty, Katkov
Historical memory

Review: The article is devoted to the bright memory of the permanent head of archaeological funds, chief curator of the Museum of Archeology and Ethnography of the Institute of Ethnological Research named after R. G. Kuzeev, Honored Worker of Culture of the Republic of Bashkortostan, archaeologist, Candidate of Historical Sciences Natalia Georgievna Rutto, who died prematurely 15 years ago in May 2007. The publication examines the main stages of N. G. Rutto's life path (1946-2007). Special attention is paid to the period of her work at the MAE, where she worked her way up from laboratory assistant to deputy director for accounting, storage and exposition of museum funds (1977-2007). Analysis of archival documents and scientific publications, written, among others, by Natalia herself, indicate that she was at the origins of the acquisition of the museum collection of the MAE, made a huge contribution to the formation of archaeological funds and to the development of the exposition and exhibition activities of the Museum of Archaeology and Ethnography. N. G. Rutto was not only engaged in accounting and storage, but also cataloguing the museum collections of the MAE. In addition, she went on various expeditions and replenished the funds of archeology with new materials. Natalia Georgievna conducted successful research activities. Studying the Srubno-Alakul interaction in the Southern Urals in the Late Bronze Age, in 2000 she defended her PhD thesis, published several dozen scientific articles and a monograph. This publication is based on documents from the Scientific Archive of the Ufa Federal Research Center of the Russian Academy of Sciences, many of which are being introduced into scientific circulation for the first time, as well as personal memoirs of the author.
Keywords: South Ural, exposition activities, museum work, museum exposition, archaeology, archaeological collections, museum funds, scientist, Museum, Natalya Georgievna Rutto