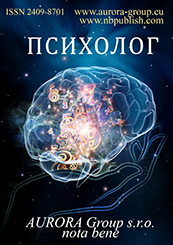 The Journal "Ďńčőîëîă " had ISSN 2306-0425 and was previously called "NB: Psychology and Psychotechnics" until December 1st, 2014.


This issue is currently being formed. All articles presented on this page have already been included in this issue, are considered published, and will remain unchanged in the final version of the issue along with other metadata of the articles.
Founder: Dr. Danilenko Vasiliy, w.danilenko@nbpublish.com
Main editor: Bogoyavlenskaya Diana Borisovna, Doctor of Psychology, mpo-120@mail.ru

Review: The psychographic features of the personality of residents of various regions of the Russian Federation are an interesting and insufficiently studied phenomenon from the standpoint of psychological knowledge. In our opinion, it is convenient to present such a phenomenon in the framework of personality research in the form of a psychological portrait - a kind of model structure reflecting the psychological characteristics of the object of research. The subject of the study is the elements of the psychological portrait of the personality of the studied contingent, the features of which constitute the content of the model of the psychographic portrait of the inhabitants of the northern territories. The parameters and model characteristics of the personality of the studied sample of residents of the region may be of interest to a wide range of very different practices – pedagogical, managerial, legal, professional and others. Separate, compositional parameters of model characteristics are presented in the study, which will form the basis of a general psychographic model of the personality of residents of the northern regions of Khma-Yugra and YANAO who have experience of illegal behavior. Such research is relevant and oriented in the practice of pedagogical, legal work with the population of the marked regions. If possible, a similar practice of scientific research on the presented topic can be transferred to other regions of the North and the Arctic zone of the Russian Federation. The solution of this task is a systematic part of the research project of the Russian Academy of Sciences under the general title "Experience in the application of customary law, history and humanization of penitentiary institutions of Ugra within the framework of European and Russian traditions (late XVI - early XXI centuries)". The research is of practical importance and its results, we hope, will be in demand by specialists from a wide range of various social practices. The main, generalized conclusion of the study is statistically confirmed personality traits of the studied contingent, reflecting the model characteristics of their originality regarding illegal behavior.
Keywords: statistical analysis, modeling, psychometrics, factology, nationality, personality, territory, illegal behavior, psychographic portrait, north