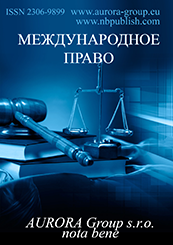 Review: The subject of the research in the framework of this article is the practice of Bulgaria's fulfillment of international obligations to protect such natural heritage sites as the Pirin National Park and the Srebyrna Nature Reserve. The features of the development of the ecological state of the specially protected natural territories under study are considered, the problems of their legal protection are identified, and the main measures that have allowed preventing the degradation of unique natural complexes, in particular, the application of the management plan for specially protected territories in the Republic of Bulgaria, are analyzed. The issues concerning the boundaries of the World Heritage sites under consideration and the procedure for their determination are investigated, the possibility of extending the buffer zone regime to the territories excluded from the World Heritage site Lake Baikal is assessed. The analysis of the experience of cooperation between the authorities of the Republic of Bulgaria and the World Heritage protection system in relation to the Pirin National Park and the Srebyrna Nature Reserve allows us to recognize the effectiveness of interaction between national and international means of nature protection. Using the comparative legal method of research, it is concluded that the positive experience of Bulgaria can be applied in solving the problems of protecting the World Heritage site Lake Baikal, including the establishment of a requirement at the level of law to prepare management plans. Based on the results of the analysis, the authors formulated recommendations for improving the domestic regulatory framework in the field of protection of World Heritage sites.
Keywords: World Heritage Committee, management plan, buffer zone, environmental law, legal protection, international law, Lake Baikal, Srebyrna Nature Reserve, world heritage, Pirin National Park
Development of separate branches of international public law

Review: The relevance of the study is due to the active activity of IMO in the field of ensuring the safety of navigation. The purpose of the study is to analyze this activity. Accordingly, the author analyzes the structure and objectives of the Organization, which are enshrined in the IMO Convention and considers the powers of the Maritime Safety Committee. The article also discusses current international legal acts adopted by IMO and regulating the range of issues related to the safety of maritime navigation. The subject of the study is the legal basis for the functioning of IMO in the field of ensuring the safety of maritime navigation. The object of the study is interstate relations in the field of international legal regulation of maritime safety. The methodological foundations of the research include general scientific and private scientific research methods, including: formal legal and comparative legal methods. The novelty of the research lies in the conclusions made by the author in the work. One of the main conclusions is the statement of the need to amend Article 15 of the IMO Convention in order to create for the Assembly the right to reject documents submitted by the Council. The author points to the need to expand the composition of the Council, through the adoption by States of amendments approved by Resolution A.1152 (32) of January 8, 2021. The peculiarity of some standards on the safety of maritime navigation adopted by IMO is the obligation of their implementation by all States. The author explains this fact for three reasons. Firstly, all IMO member States participate in the creation and amendment of international legal acts that enshrine standards of this kind, since they are part of the Maritime Safety Committee. Secondly, this approach excludes unequal conditions between States. Thirdly, it is aimed at reducing the number of States unwilling to adhere to the requirements established by maritime safety standards.
Keywords: MPPSS-72, SAR, STCW, SOLAS-74, safety at sea, certification of seafarers, safety of maritime navigation, design requirements, maritime law, IMO
International law and national law

Review: The subject of the study is the norms of the national law of the Russian Federation on the protection and preservation of languages, as well as the norms and principles of international law in this area. The object of the research of this article is the relations in the field of legal regulation of the protection and preservation of the languages of indigenous peoples and local communities. Based on comparative legal, formal legal and systematic research methods, the article presents an analysis of the legal foundations of language policy in Russia, as well as the provisions of international legal acts in the field of the protection of the languages of indigenous peoples and local communities, namely: the Declaration of Principles of International Cultural Cooperation of 1966, the UN Declaration on the Principles of International Law of 1970., The European Convention on Human Rights of 1950, the European Charter of Regional or National Minority Languages of 1992, as well as PACE resolutions and recommendations. The novelty of this study lies in the fact that the authors conducted a comprehensive analysis of the modern legal foundations of language policy in Russia. In the article, the authors consider in detail the concepts of "national minorities" and "cultural values" in accordance with the national legislation of the Russian Federation and international legal acts. The authors come to the conclusion that the Russian historical experience and modern practice of preserving the languages of national minorities, as well as the legal mechanism for the protection of languages provided for by the Constitution of the Russian Federation and other normative legal acts, in many ways surpasses the mechanism provided for by the European Charter. Thus, the exclusion of Russia from the Council of Europe will not negatively affect their protection and preservation within our state.
Keywords: rights of indigenous peoples, cultural values, The Constitution of the Russian Federation, ECHR, prohibition of discrimination, European Charter of Languages, human rights, regional languages, minority languages, language policy
International courts