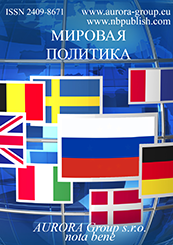 The Journal "Мировая политика " had ISSN 2306-4226 and was previously called "NB: International Relations" until December 1st, 2014.

Review: Interregionalism occupies an important place in the foreign policy of the European Union, because through it the EU seeks to expand its presence in various regions of the world and export its norms, views and values. The promising, rapidly developing Asian region is no exception. This article is devoted to the study of the process of building an inter–regional policy by the European Union in the Asian direction, namely with the largest regional association in the region - the Association of Southeast Asian Nations (ASEAN). The purpose of this study is to identify the main factors hindering the building of effective cooperation between the regions, as well as the creation of a free trade zone (FTA). The main conclusion of this study is that there are a number of obstacles to the creation of the EU-ASEAN intercontinental free trade area, which significantly affect the relations between regional groupings. Firstly, it is the practice of concluding bilateral agreements, used as a springboard for the future FTA. Bilateral agreements have already been successfully signed with individual countries, namely Singapore and Vietnam, but contradictions of both an economic and political nature arise with other ASEAN member countries. Secondly, the existing competition with China and the United States for influence in the region hinders the EU's attempts to pursue its inter-regional policy.
Keywords: bilateral partnership, interregional cooperation, Free trading zone, transregionalism, Trans-Pacific Partnership, Regional Comprehensive Economic Partnership (RCEP), Asia-Europe Meeting, Interregionalism, ASEAN, European Union
Issues of war and peace

Review: Due to the increase in the number of conflicts, which lead to the growth of tension and destabilization of the system of international relations, the search for new mechanisms for their settlement and new participants who are able to introduce a positive agenda through interaction with all parties is an urgent research task. This paper focuses on international non-governmental organizations (INGOs), acting as such new actors and taking part in the settlement of the conflict in Syria. The purpose of the article is to analyze their contribution to the Syrian peace process, to consider their possibilities and limitations. The methodology is based on discourse analysis and case studies. The case of Syria was chosen because of the ongoing nature of the civil war there, as well as the fact that INGOs have proposed a number of new initiatives to resolve the conflict, which makes this study novel. The study identified the main organizations that propose a peaceful settlement of the conflict, and also identified the main trends in the participation of INGOs in the crisis settlement in Syria. Thus, participating in the peace process, they also implement peacebuilding projects, actively cooperate with local INGOs, and switch to remote work formats due to security problems. However, the analysis of their proposals for the peace process also revealed the main problems of the activities of INGOs within the framework of track II diplomacy, which consist in their neglect of the principle of impartiality. The ability of INGOs to promote their initiatives is also influenced by the dynamics of traditional diplomacy. The key takeaway is that, despite the complexity of the Syrian peace process and the dominant role of traditional diplomacy, INGOs have a significant positive impact on the peace process as they promote grassroots cohesion among the Syrian population and encourage them to form civil associations similar to INGOs, which are also gradually beginning to look for ways of national reconciliation.
Keywords: Syria, non-state actors, principles of INGOs, mediation, violence, civil society, armed conflict, track two diplomacy, peace processes, INGOs
Theory and methodology of international relations

Review: In February 2022 there were massive demonstrations in Nepal against the $500 million "free" aid agreement between the country and the Millennium Challenge Corporation (MCC). The protests subsided, and the Nepalese parliament overwhelmingly approved the agreement. In July 2022, civil unrest broke out in Sri Lanka. A member of parliament shot himself, the prime minister's ancestral home was burned down, the defense ministry was forced to issue a "shoot-to-kill" order against protesters, and the president promised not to sign the MCC. In this article, the author explores the MCC as an instrument of American influence in developing countries, using Sri Lanka and Nepal as examples. Particular attention is given to specific mechanisms of economic pressure on developing countries to achieve political results. This article introduces the MCC organization and, by describing events in Nepal and Sri Lanka, reveals the role that the MCC plays in the process of American intervention in the Third World. The study analyzes statistics that illustrate the economic impact of the U.S. on developing countries. The author draws conclusions about the impact of U.S. activities through the MCC on the regional environment. There are many ways in which the United States intervenes in regional affairs. The MCC is only one of them, but it is particularly significant. Through it, the U.S. establishes privileged conditions for itself in negotiations with developing countries to achieve results that could not be obtained without economic pressure.
Keywords: developing countries, debt trap, foreign aid, economy, Sri Lanks, Nepal, USA, MCC, IPR, APR
Challenges and threats to international security

Review: The object of the study is a hypothetical nuclear war between China and the United States. The subject of the study is the strategic risks preventing a nuclear war between China and the United States. The aim of the study is to determine the strategic risks that prevent the initiation of a nuclear war between China and the United States at the stage of making a decision to launch a first nuclear strike. Methods and methodology. The study was carried out within the framework of neorealism. A systematic approach was used as well as the methodology of classical military-political studies. Among the methods used were such general scientific methods as analysis, synthesis, induction, deduction. The method of studying documents and the factorial approach were also used. The article analyzes the strategic risks that prevent the unleashing of a nuclear war between powers with the world's largest economies in the context of intensive globalization.      The author concludes that the strategic risks of nuclear war outweigh the benefits of it especially in the context of intense globalization. The expectation of a nuclear strike and the mechanism for making a decision about it, in the author's opinion, are one of the most important factors in the low probability of actors to resort to nuclear war as a means of resolving contradictions. At the same time the misinterpretation of damage and the difference in understanding the scale of a nuclear strike also hinders a nuclear war. The novelty of this research. The issue of a hypothetical nuclear war between China and the United States is considered for the first time in scenarios of limited and massive nuclear weapons, simultaneously taking into account the factors of intensive globalization; the «fog of war» effect, which plays an extremely important role; the risk of a distorted interpretation by the attacked of the scale of nuclear strikes; different understanding by the attacker and the attacked of what is considered a limited strike and the risk of a disproportionate response; erasing the boundary between limited and massive nuclear strike in the context of intensive globalization and reducing the level of unacceptable damage; third party factors, incl. state or non-state actors capable of provoking a nuclear escalation.
Keywords: fog of war, unacceptable damage, globalization, escalation, strategy, limited nuclear strike, massive nuclear strike, nuclear war, USA, China