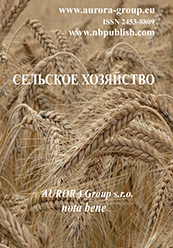 This issue is currently being formed. All articles presented on this page have already been included in this issue, are considered published, and will remain unchanged in the final version of the issue along with other metadata of the articles.
Founder: Dr. Danilenko Vasiliy, w.danilenko@nbpublish.com
Main editor: Savin Igor' Yur'evich, Doctor of Agriculture, savigory@gmail.com

Review: The risks associated with the widespread use of genetically modified crops in agriculture need to be assessed in detail and minimized, including by legal means. The world is divided into two camps regarding the attitude to the commercial cultivation of genetically modified crops. In many countries, including the EU and the Russian Federation, it is prohibited by law. Such prohibitions are based on the precautionary principle in the widespread use of genetically modified crops due to insufficient knowledge of its consequences. The legal regulation of the risk management of the use of GMOs has been developed at the international level, for example, in the Cartagena Protocol on Biosafety, to which the Russian Federation has not yet joined, but plans based on the tasks set out in the strategic planning documents. The legal regulation of the quality and safety of agricultural products in China is carried out in accordance with the law adopted in 2006. The Law on the Quality and Safety of Agricultural Products regulating the issues of its production, as well as the implementation of state management and supervision of its quality and safety. The system for monitoring the risks of quality and safety of agricultural products in China is being established on an interdisciplinary basis. However, the issue of long-term security remains open. The existing approach in the Russian Federation to introduce a moratorium on the commercial use of genetically modified organisms is appropriate as long as the tasks of ensuring the country's food security can be solved by other methods and means. However, in order to prevent the lag of Russian science and technology in the field under consideration, the state should pay increased attention to their development and allocate sufficient funding, provided that strict state control is exercised over ensuring the safety of ongoing research.
Keywords: state management, legislation, commercial use, genetically modified organisms, legal regulation, food security, environment, agriculture, state control, risk assessment